The city is in turmoil as the police hoist the lifeless body of a young woman from the water. Who committed this brutal murder? The residents are in shock, the perpetrator has disappeared and the investigation team is left in the dark. It’s time to hire a private investigator with an impeccable reputation and you’re the perfect candidate!

As a true Sherlock you have to combine logic and empathy with field work to reconstruct the preceding events and thus solve this murder mystery. Dig through the city for clues about the murder weapon. Win the trust of witnesses and listen to their valuable testimonies about the appearance of the perpetrator. Take photographs of the possible crime scenes and make sure another private investigator does not take credit for your hard work.

How does it work?

You and your team members each get a smartphone or tablet with GPS. This way you can find the clues and witnesses that are scattered all over the city. Using the same device you can follow every movement of your opponents in real time and try to spy on them to steal a clue. Do you think you have the first name or last name of the killer, or know what weapon he used? Then get to one of the police stations scattered across the map as quickly a possible. Because the first one to guess one of the clues right will get bonus points!

Who can play this?

Sherlock is a city game that uses smartphones and tablets, so anyone who can use such a device can play. Do you like suspense, strategy and collaboration? Then this game is definitely for you! You’ll feel like you’re on the set of a real murder-mystery movie!

Where, how long and how many?

The game lasts about a total of about 2 hours and is suitable for multiple groups, ranging from 6 to 80 people. The game can be played in all cities and villages, where maps can be customised to fit the environment. 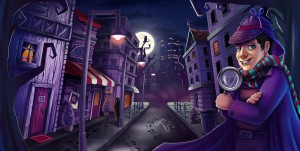 Would you like to offer these games to your customers?
Register!